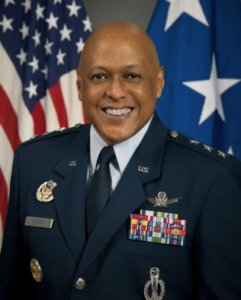 Lt. Gen. Cotton entered the Air Force through the ROTC program in 1986 where he earned a bachelor’s degree in political science from North Carolina State University in Raleigh. He has commanded at the squadron, group, and wing levels. He served as the Deputy Director of the Secretary and Chief of Staff of the Air Force Executive Action Group, as the Senior Military Assistant to the Under Secretary of Defense for Intelligence, and Deputy Director of the National Reconnaissance Office. He was also the Vice Commander and Commander of the 341st Missile Wing, Malmstrom AFB, Montana, and the Commander of the 45th Space Wing and Director of the Eastern Range, Patrick AFB, Florida. Prior to his current assignment, Lt. Gen. Cotton served as the Commander and President, Air University, Air Education and Training Command, Maxwell AFB, Alabama.