Atlanta, December 8, 2021 – The media and entertainment industry is undergoing profound changes and has largely recovered from revenues lost last year during the shock of the pandemic.

These changes, the innovations adopted by the industry and its significant economic impact are described in detail in TAG’s first-ever Media and Entertainment Ecosystem report, which launched today.

In 2020, Media and entertainment contributed a whopping $2 trillion annual economic impact globally and some $500 billion in the United States, the largest media market in the world. In Georgia, the Technology Association of Georgia identified 713 media and entertainment companies employing 40,000 people and generating $14.7 billion in revenues annually. Georgia has developed into a global hub for film, television, music, and video gaming, and these subsectors together contributed $6.6 billion in revenue, according the report issued by TAG’s new Media and Entertainment Society.

Despite undergoing a slump early in the pandemic, many media and entertainment companies have an outlook for solid growth. A significant number of companies tracked by TAG adapted to the challenges of the past two years by innovating on familiar platforms while also expanding in areas like streaming technology, thereby serving people’s innate needs for entertainment to brighten their lives wherever they are. Combined, the companies tracked by TAG encompass six subsectors of media and entertainment and are projected to grow 6% annually through 2024. 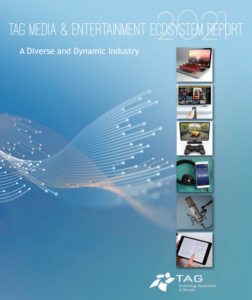 “This report does a fantastic job of highlighting the diversity of media and entertainment companies and the critical impact these firms have on the technology ecosystem,” said Larry K. Williams, President and CEO of TAG. “It helps us understand the innovation and adaptability of the most successful media companies as well as the effectiveness of policies in Georgia that support film, TV and gaming. These policies are a powerful magnet attracting creative and production talent, along with the big budget films that companies are willing to make in Georgia.”

With its strong contributions to Georgia’s economy across six subsectors, Media and Entertainment is integrally woven into the state’s economic fabric today, and poised to increase in prominence as the industry evolves in coming years. Furthermore, the increasing prominence of Georgia on the global stage, availability of world-class talent and the robust ecosystem of technological innovation will ensure that we have a highly dynamic ecosystem to accompany the sector’s sustained economic growth.

The six media and entertainment sectors covered in the report are:

The report highlights the recovery of film and video production in 2020 and 2021 and the industry’s importance to the economy in Georgia. There are 129 such businesses in the state generating $2.9 billion in revenue and employing 16,000 people.